Google says it has made it possible for a smartphone to interpret and “read aloud” sign language.

The tech firm has not made an app of its own but has published algorithms which it hopes developers will use to make their own apps.

Until now, this type of software has only worked on PCs.

Campaigners from the hearing-impaired community have welcomed the move, but say the tech might struggle to fully grasp some conversations.

In an AI blog, Google research engineers Valentin Bazarevsky and Fan Zhang said the intention of the freely published technology was to serve as “the basis for sign language understanding”. It was created in partnership with image software company MediaPipe.

“We’re excited to see what people come up with. For our part, we will continue our research to make the technology more robust and to stabilise tracking, increasing the number of gestures we can reliably detect,” a spokeswoman for Google told the BBC.

Google acknowledges this is a first step. Campaigners say an app that produced audio from hand signals alone would miss any facial expressions or speed of signing and these can change the meaning of what is being discussed.

Also, any regionalisms which exist in a local area would not be included. 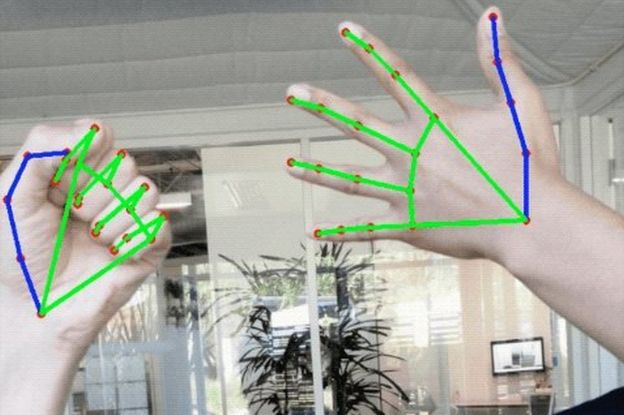 Jesal Vishnuram, Action on Hearing Loss’s technology manager, says the initiative is a good first step for hearing people, but that it needs to be paired with other capabilities.

“From a deaf person’s perspective, it’d be more beneficial for software to be developed which could provide automated translations of text or audio into British Sign Language (BSL) to help everyday conversations and reduce isolation in the hearing world,” he said.

Until now, when trying to track hands on video, finger-bending and flicks of the wrist have hidden other parts of the hand. This confused earlier versions of this kind of software.

Google imposes a graph on 21 points across the fingers, palm and back of the hand, making it easier to understand a hand signal if the hand and arm twist or two fingers touch.

Other large US software providers have developed technologies that have attempted to read aloud sign language on PCs.

Last year, Microsoft teamed up with the National Technical Institute for the Deaf to use desktop computers in classrooms that helped students with hearing disabilities via a presentation translator. 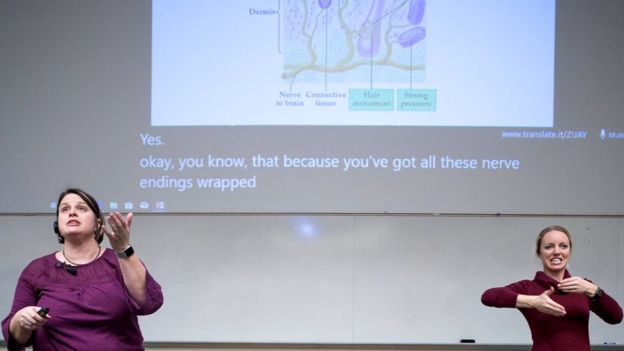 In a blog, students described having previously missed some of what their professors had said because they had to keep switching attention from human sign language interpreters to what was being written on the board.

But by having all the viewing information presented via a desktop, the problem was solved.

Elsewhere in the world, innovators have created their own home-grown tech.

One 25-year-old developer in Kenya has built a pair of haptic gloves that translate sign language to an Android application which reads the text aloud.

Roy Allela made the gloves for his hearing-impaired niece, and his innovation recently won an award from the American Society of Mechanical Engineers.